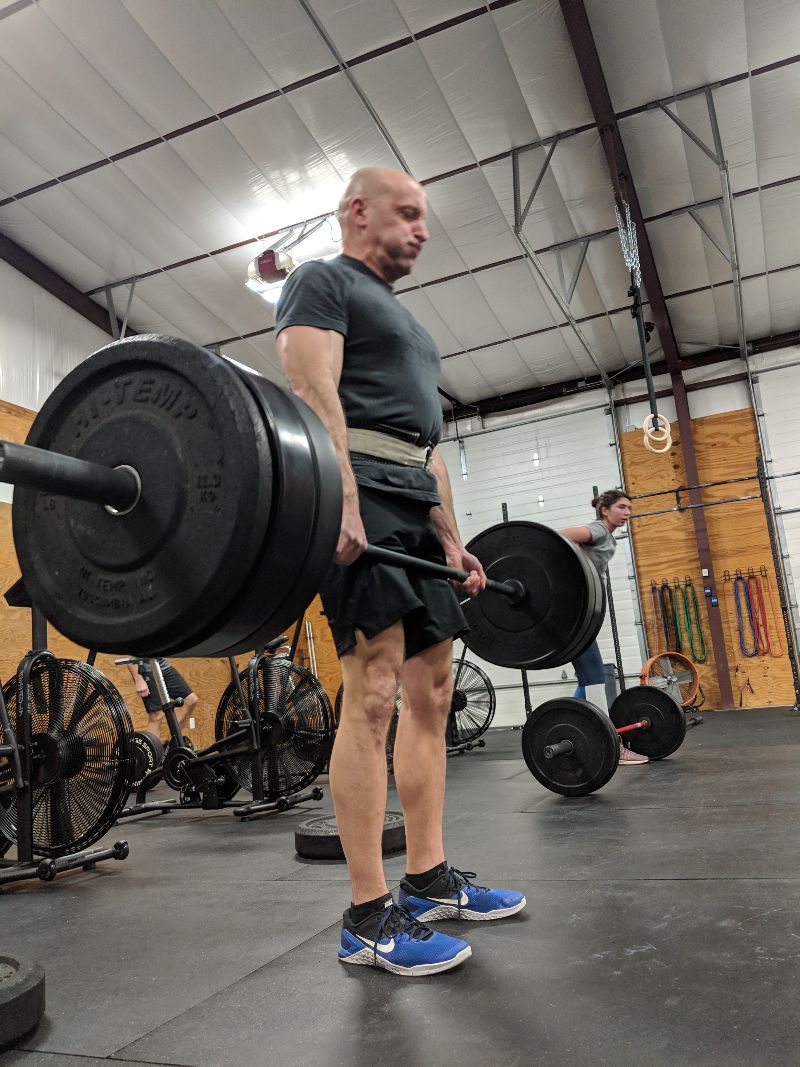 We are kicking off the New Year with James Creech as our Member of the Month! It would be hard to believe that all of you don’t already know James; from his Facebook banter to entice friendly competition between members of other classes, to his non-stop hard work of showing up to every PM class possible. James is a staple in our community and one of the behind the scenes people who helped transform CrossFit Georgetown to what it is now. He wasn’t always “team” CrossFit,  read below to see how his journey led him to where he is now.

My Journey into CrossFit started at Crossfit Georgetown a little more than 3 years ago.  Lorie had been doing Crossfit for about 8 months, I was doing my own thing in my garage gym. I knew that she loved the people and was really enjoying CrossFit over going to a traditional gym; but I didn’t want to get in her way.  One day Lorie comes home to tell me that CrossFit Georgetown was starting a weightlifting class on Wednesday nights to see if I was interested in going, and at the time I was really into Powerlifting, so I said yes.  Little did I know that this was an Olympic Lifting Class, but after going 1 time I knew I wanted to take on this challenge.  I did the class for a month and then asked Lorie if she would mind if I went to CrossFit a couple times a week.  It didn’t take me but 2 weeks into the class to tell her I wanted to sign up for unlimited classes and I have been hooked ever since.

I have always been around sports, when I was young my parents had me in every sport they could possibly find like baseball, basketball, soccer, gymnastics, swimming and tennis. After graduating high school I spent some time in the Army, which just reinforced my desire to workout and stay in shape.  I will admit over the years I have had ups and downs in physical fitness, including sometimes that having to go to the store and buy larger pants.  This would only fuel me to say I have to do something.  My biggest problem was this belief a lot of people had at the time  that you either have to be weightlifter or you had to be into cardio.  I would do one gain some muscle, then I would start running doing a lot of distance work, including a lot of half marathons and marathons.  I would of course get bored and start the cycle over again. This is why I Love CrossFit so much, I can have the best of both worlds, cardio and strength.

I remember my first year in CrossFit I would set these lofty goals of being a Master’s Game Athlete or something, not that there is anything wrong with it. Now my goals have changed and are more realistic looking towards the future. This past year I achieved one major goal to participate in a competition (other than the Open), and I was very proud of the results.  This made me think of goals for next year, which include not only doing a competition but being on the podium. My other goals are pretty simple: Butterfly Pull-ups, Bar and Ring Muscle-ups, and a 315lbs + back Squat. I could throw in some other lifts but for me that has been a weak link and as my Back Squat goes up so do my other lifts.

My absolute favorite thing about CrossFit Georgetown has to be the community. I have gained so many good friends over the past 3 years. Everyone is so encouraging and we are the biggest cheerleaders for each other. Everyone knows I go hard every time and that I am super competitive, I know I don’t always acknowledge it but when I am going and things get hard; to hear somebody call out my name just keeps me driving. I would just like to say Thank You!