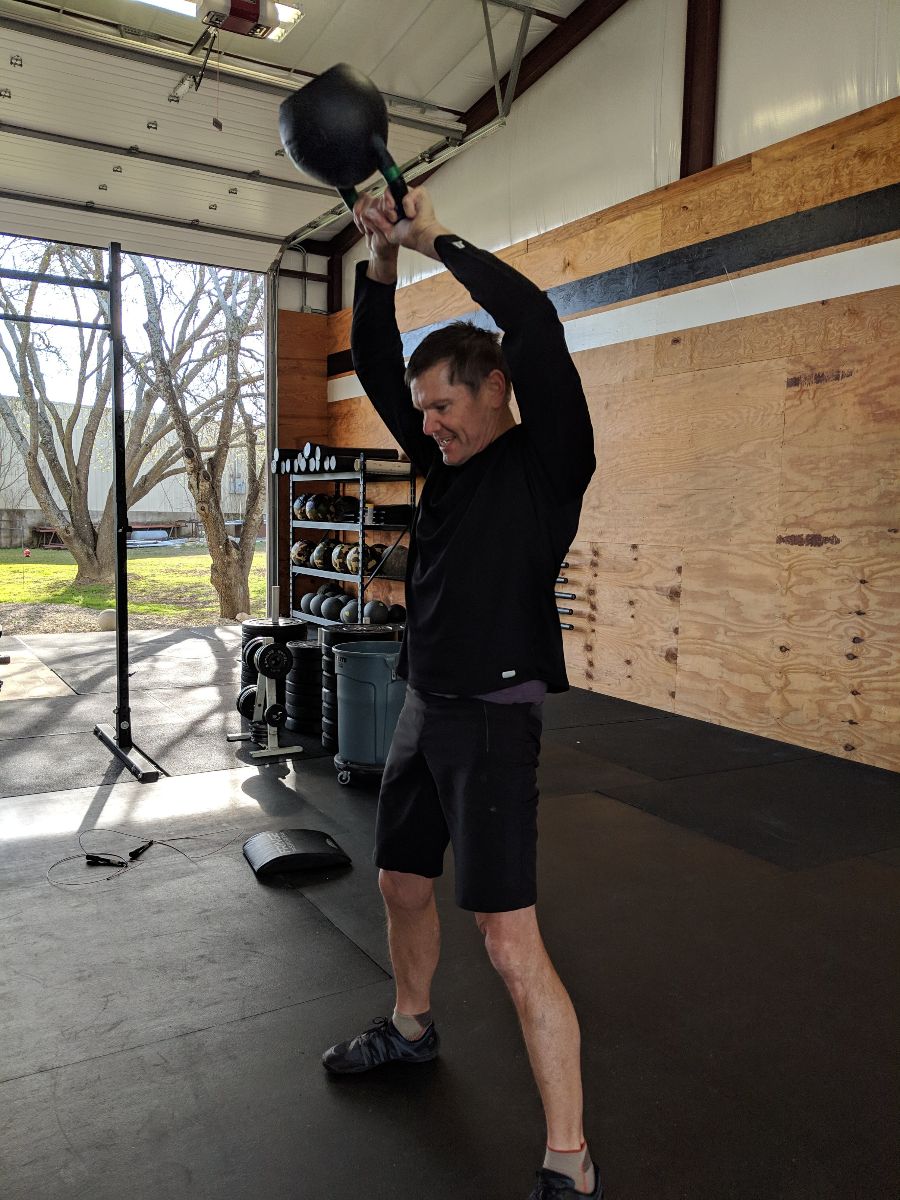 Meet Gary Ruwaldt! Gary hasn’t always been into CrossFit, in fact his whole life he never really participated in any sports. It wasn’t until about 5 years ago that he was introduced by Samantha (Owner of CFG & his daughter) and has been “addicted” ever since. Read below for his story and how he got started in CrossFit and where he hopes to go….

First let me disclose I am Coach Sam’s father, aka “Gary” or “Dad” at the box depending on which person “Coach Sam” or “Daughter Sam” is talking to.  I joined Georgetown CrossFit – (a different owner then) five and half years ago to help newly hired Coach Sam increase her class size. I joined thinking it would be a short-term commitment on my part at twice a week. I quickly realized how out of shape I was at fifty-four years old, six foot one inches tall and two hundred and twenty five pounds. I had gone through a total hip replacement at forty-eight and the ten years prior to that slowed way down from the hip malfunction. My movements were sluggish and awkward compared to the other folks at the box and my weight loads for the barbell movements were minimal, either a PVC pipe or the 15lb barbell. I had no idea what mobility even meant but I did learn about scaling the movements and the weights. I could not run, so I slowly built up a little endurance through the one rower the box had at that time – (still do not run today as too much pounding on the hip joint is not good.) As I stayed with CrossFit and by about the sixth to nine-month time frame I noticed my body starting to change – never had witnessed a change with other exercises programs even when I was a younger man.  I had increased my days at the box to three and then to four days a week. My wife Maria joined the box about this time when she noticed my changes and thought the workout would help her take her tennis game to the next level – it did. Still suffering from mobility issues, injuries and poor diet I decided to take the next baby step – fix my diet; by following Mark Sisson Primal Blueprint and fixing gut health. My workouts got better – slightly more weight more endurance and the changes kept coming. My workouts had moved to four to five days a week using the open box Saturday as an extra or makeup workout. Then I increased my mobility and overcame mobility issues, injuries and soreness with Kelly Starrett’s Becoming a Supple Leopard. My workouts started to flow as the mobility increased over the next year – yes year.

The best thing is Coach Sam is back at Georgetown CrossFit not just as a coach but owner who understands how to modify the movements to keep you moving. My biggest inspiration comes from the CrossFit community and watching what folks can achieve by not giving up. The best thing about the CrossFit Georgetown community is the people, all different ages and how they support each other in and out of the box. The community seems to realize each of us are a work in progress, with differing degrees of capabilities, at different stages in life. I personally get motivated by seeing others around the box during the WODS giving it their all – it makes me do better.  The one thing I have learned is to never stop, if injured or sore or whatever – just keep moving, just show up! “RX what you can, scale the rest”.

One more thing I learned early on is check the ego at the door; I have seen too many folks go too fast with too much weight and take themselves out; be the tortoise. CrossFit works all by itself none of the other stuff has to be done – Supple Leopard, Primal, Gut Health etc., unless you are wanting to take it to a new level.  My goals are longevity, and also to accomplish hand stand push-ups. Why not? Today at fifty-nine years old, six foot one inches tall and one hundred ninety pounds – I CrossFit because it makes life better, everything else I do makes CrossFit better.